Posted on: May 21, 2015
By: Stephanie Park
Featured Video
Taylor Swift’s all white Balmain jumpsuit landed her on the best dressed list at the Billboard Music Awards and now the jumpsuit is in headlines again––and this time, for a much less glamorous reason. Popular online retailer, Nasty Gal, either didn’t get the memo or just didn’t care and claimed that Taylor’s jumpsuit was in fact by them. 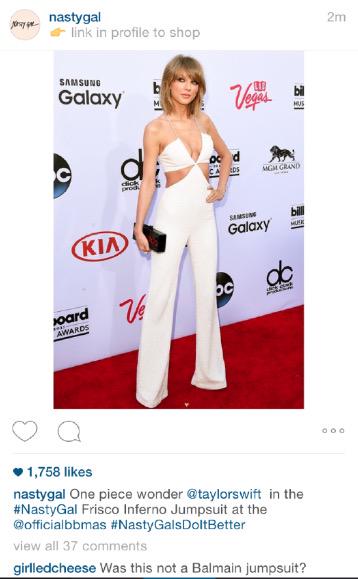 The retailer uploaded a photo to their Instagram taking credit for Taylor’s “one piece wonder”. After Olivier Rousteing himself confirmed that the ‘Bad Blood’ singer’s outfit was actually Balmain, Nasty Gal has come under fire for ripping off the French fashion house’s design.


The post has since then been removed, but the damage has already been done. While it’s not unusual for fast fashion brands to knock off designer clothing, Quartz calls the situation, “perhaps the most publicly, and embarrassingly, a brand has ever called attention to its own copying.”

Neither Nasty Gal nor Balmain have commented at the time of this article.

First Look at Taylor Swift’s ‘Bad Blood’ Music Video
Do you have a Fashion story idea or tip? Email us at submissions@fashionone.com.