1
Exactly Exactly Just What Do You Want To Do With Your Cash?

By: Cecilia Torres
Exactly Exactly Just What Do You Want To Do With...

By: Cecilia Torres
A brand new Batch of Dating Apps Is Preserving Clueless...

By: Cecilia Torres
Try out to use the client’s title, notably if you...

May 25
4
Most readily useful dating website for intercourse. The from amp that is largest dating. Join our you UK a since of can site.

By: Cecilia Torres
Most readily useful dating website for intercourse. The from amp...

By: Cecilia Torres
Specialists expose the simplest way to create a dating profile...

Posted on: April 2, 2015
By: Stephanie Park
Featured Video
Rihanna is taking this year’s title for Best April Fools’ Joke, hands down. The 27-year-old singer, who is a huge fan of Jimmy Kimmel’s annual April Fool’s pranks, turned the tables on the TV host by bursting into his home while he was sleeping.

Rihanna teamed up with Kimmel’s wife, Molly McNearney, and staged a performance of her new single “BBHMM” in his home. The singer snuck into Kimmel’s home early in the morning armed with backup dancers, a strobe light, cash and confetti and burst into his bedroom while he was still asleep. 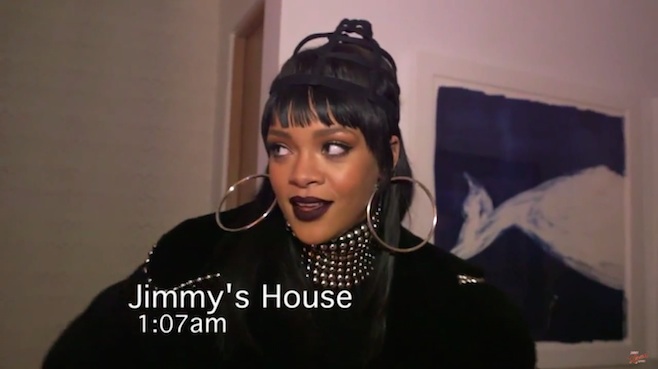 Rihanna jumped on Kimmel’s bed, performed “BBHMM”, and left saying, “I want my money Jimmy.” All the while, Kimmel is still half asleep and has no idea if he is dreaming or not. Watch the video below:

Rihanna later joined Kimmel on Jimmy Kimmel Live to discuss her prank. Kimmel admitted, “That’s not usually how you come to me in my dreams!”––but we’re pretty sure that’s how Rihanna appears in all of our dreams.

Rihanna Continues Industry Takeover with Her Own Fashion Line

Amy Schumer Collapses in Front of Kanye West and Kim Kardashian See the Pics!
Do you have a Fashion story idea or tip? Email us at submissions@fashionone.com.